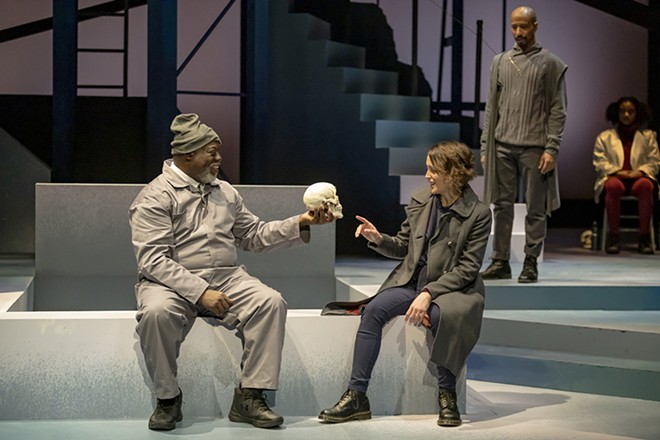 Hamlet is Shakespeare’s longest play. If everything he wrote for the work ends up on stage, a production can take nearly five hours. And the role of Hamlet — the conflicted prince of Denmark, wrestling with how to avenge his father’s murder — is the largest Shakespeare created. It is a character almost always brought to life by a male actor.

None of this applies to Cincinnati Shakespeare Company’s (CSC) current production of Hamlet — the running time (with an intermission) is less than two and a half hours and the title role is played by CSC veteran Sara Clark as a perplexed, fiery, witty female. The production features many more differences, too, including the performance’s opening lines. Instead of the traditional first scene featuring castle guards at night, Hamlet pronounces the show’s most famous soliloquy, “To be or not to be, that is the question,” which typically happens about midway through the play.

Why these changes? Director Sarah Lynn Brown not only staged this production, but she also made the “cutting,” or the rearrangement of the script. By launching immediately into Hamlet’s well-known speech at the late king’s funeral, the audience gets insight into her state of mind right off the bat. With Clark’s precise pausing-and-restarting rendition, it’s quickly demonstrated that Hamlet is furious, but uncertain about what’s to be done.

Brown’s rearrangement of material goes much further. The king’s ghost is omnipresent in this production; he is usually portrayed only briefly in the first scene as he materializes to urge Hamlet to “Remember me!” In fact, all the actors are constantly present, sitting upstage in straight-back chairs, standing for moments of action. The king (played ominously by Jared Joplin) rises from an abstract tomb at center stage and almost never leaves. In fact, as various characters meet their demise, he is close at hand, sometimes overseeing a costume change to designate their departure.

In addition to reducing the length of the show, Brown’s adaptation has added material from other Shakespearean works, including Macbeth, Richard III and King John. These amplify and add texture and motivation to Ophelia (Angelique Archer), whose relationship to a female Hamlet has additional dimensions of confusion, frustration and eventually suicidal madness.

With Hamlet portrayed as a young woman, she and her mother, Queen Gertrude (Sara Mackie), have a different relationship than in most productions of the play. Gertrude is compromised because her new husband, King Claudius (Jim Hopkins), is Hamlet’s uncle. He is also Gertrude’s former brother-in-law and the murderer of the king. Mackie’s Gertrude is more sympathetic and maternal than usual in her interactions with Hamlet, tinged with fear and uncertainty. As Claudius, Hopkins employs a smarmy, ingratiating exterior to mask his fears about his crime being uncovered.

The conjoined characters of Rosencrantz and Guildenstern (A.J. Baldwin, Brianna Miller) offer several moments of humor, often locked arm-in-arm and moving with exaggerated, self-conscious strides. They are perfect foils for Hamlet’s stern inquisition regarding their motives and orders, a pair of Tweedledum and Tweedledee sillies who are pawns in a larger, more insidious tale.

The rambunctious traveling troupe of Players — actors who present a scene conceived by Hamlet to trick out the king’s and queen’s reactions to the murder plot — are played by Cary Davenport, Colleen Dougherty, Courtney Lucien and Nathan Sullivan. Dougherty uses a hand-held video camera to provide images, sometimes live-action, sometimes frozen, that are projected onto the broad pallets and floor of Samantha Reno’s abstract set. Especially affecting are moments of close-up video attention to Clark’s expressive face as she studies the royals’ telling expressions to the uncomfortable narrative being enacted.

Particular note should be made of the contributions of Brave Berlin to this production. That name is familiar to people who attended the Lumenocity events at Washington Park from 2013 to 2016 and the BLINK festivals in 2017 and 2019. The creative firm specializes in illusion, specifically the medium of projection mapping, wherein visual images are designed and projected onto static surfaces to convey realistic or fanciful scenes. Their impressionistic imagery underscores the mood of the action on Reno’s angular set. The effect is both subtle and profound when combined with Kevin Semancik’s ethereal sound design and Justen N. Locke’s shadow-play stage lighting.

There is little that is traditional about this CSC production: Abbi Howson’s costumes are modern dress. Claudius wears a conservative burgundy business suit; Gertrude is in an aqua pants ensemble with a flowing cape. As Hamlet, Clark dons subdued black and indigo jackets and slacks. Rosencrantz and Guildenstern wear loud plaid sport coats, and the late king’s ghost is dressed all in white.

That lack of tradition makes this Hamlet all the more compelling. For anyone who’s seen more standard productions, this one requires attention, as material has been moved, reimagined or excised altogether. Brave Berlin’s projections also provide occasional indications of acts and scenes in the original; that’s helpful, but it also underscores how dramatically much of the material has been rearranged.

If you’ve seen a traditional staging of Hamlet, you won’t be confused by this one. In fact, you might appreciate the distillation. Brown’s concise adaptation is certainly less arduous than sitting through four or more hours of theater. (This Hamlet’s two acts are just about one hour apiece, with a 15-minute intermission.)

Sara Clark’s female take on Hamlet is refreshing and insightful. All in all, it’s a bracing evening of theater, a demonstration of how and why the works of Shakespeare remain relevant after more than four centuries.

Hamlet, presented by the Cincinnati Shakespeare Company (1195 Elm St., Over-the-Rhine), continues through March 20. Tickets start at $14. A mask and proof of vaccination or a negative COVID test are required for entry. For more info and tickets, visit cincyshakes.com.

Send CityBeat a news or story tip or submit a calendar event.