How Blues Band Blew the Roof Off St. Luke’s School 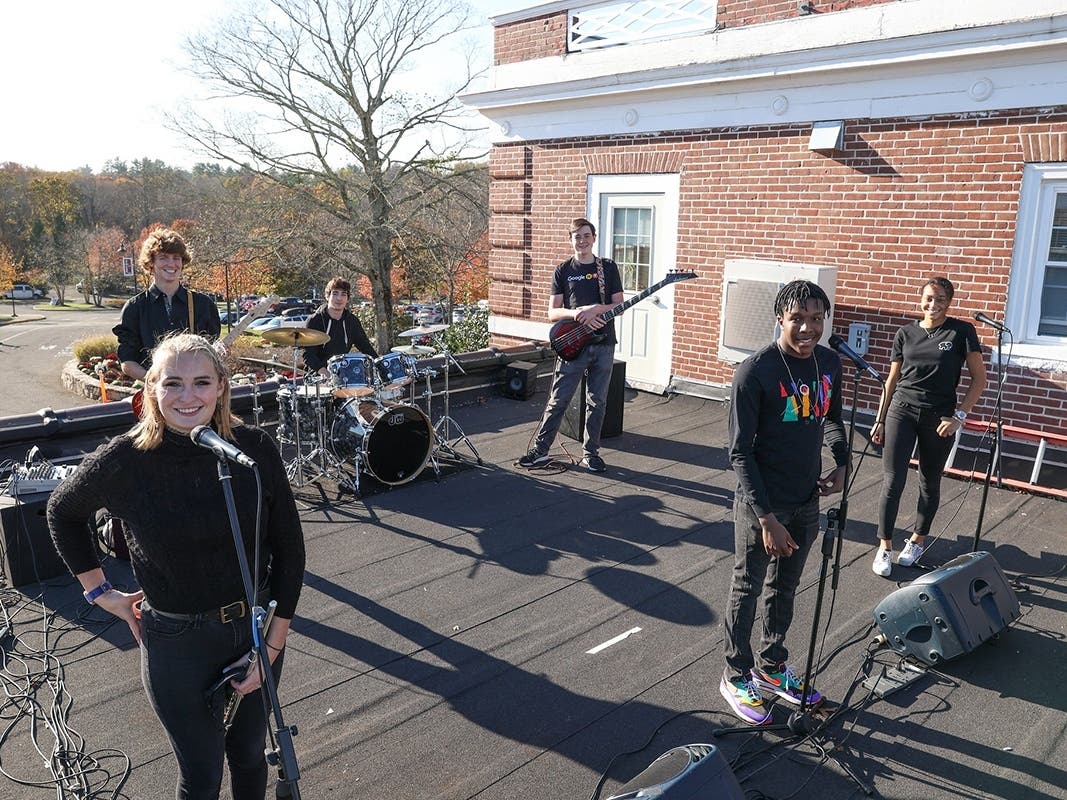 Well over 4,000 people, and climbing, have viewed the “Times Like These” music video featuring St. Luke’s Blues Band members. The stunning video, shot on the school rooftop, premiered at St. Luke’s State of the School and seems destined to go down in history as one of the coolest things a school has ever done.

“The music portion of the State of the School is always one of the best parts,” said Marketing Director Nancy Troeger, who produces the annual event. “Given the Covid situation, we needed to find a way to feature students safely and still have the excitement of a live performance.”

Troeger met with Visual Media Director, Valerie Parker on the rooftop outside her office. “When it’s warm enough, we meet out there often so that we can talk without masks on,” Troeger explained. While the two were brainstorming possibilities, Parker looked out at the beautiful view of the campus and said “What about a rooftop video shoot?” The rest is St. Luke’s history.

Students on the Roof? Really?

Troeger made a beeline for Upper School Band Director Peter Valera to ask if he could get members of Blues Band to perform. “He said yes in two seconds flat,” said Troeger. As did Associate Head of School and Chief Financial Officer Julia Gabriele. “Julia loved the concept immediately,” reports Troeger. “I was excited but unsure about asking to have students on a rooftop. It’s a safe spot but it’s still the roof. I did not know if she’d look at me like I had five heads and zero judgment. But she smiled and said ‘That sounds awesome. Do it.’ And we did.”

“I thought there was absolutely no way the school would go for the idea, but I am so glad they did,” said Valera, who led the musicians: Tommy Lewis ’22, Audrey Magnusen ’21, Sam Pakman ’22, Zaire Profit ’21, Calvin Strothenke ’22, and Claire Watson ’21.

“The kids are so talented and I knew they could pull off a music video quickly,” said Valera, who is in his 21st year at St. Luke’s and, when not in the classroom, plays the saxophone professionally across the tri-state area. “St. Luke’s always talks about having this growth mindset and fearlessness, and these kids just said ‘Yes! Let’s do it!’ and they jumped right in.”

The group consisted of Magnusen and Profit on vocals, Watson on flute and backup vocals, Pakman on drums, Lewis on guitar, and Strothenke on bass guitar.

After discussing the theme of the State of the School with Troeger, Valera selected the ideal song, “Times Like These” by Foo Fighters. “The State of the School was all about sticking together and persevering through these tough times. I just tried to find the right musical energy and message,” said Valera. “I knew the kids could rock out on that song and sound great.”

“Our teachers were very open to our ideas and feedback and treated us with great respect throughout the process,” said Lewis. “Personally, it was one of my favorite experiences at St. Luke’s.”

Magnusen agreed, saying “Even though the six of us had never been together as a whole and we come from different friend groups and grades, it was amazing to see how well we clicked and had fun during that time.”

The students were especially appreciative that the school found a way to pull the performance together. “I think that this concert shows that SLS is willing to branch out and make the best of difficult times,” said Strothenke.

“This project allowed the students participating to feel they were taking a new step in St. Luke’s entertainment,” Pakman added. He and Lewis worked with Valera on music production, creating a clean, professional audio mix for the video.

Head of School Mark Davis said this student/teacher creative process “exemplifies the empowered student” described in his State of the School presentation adding, “Peter selected the song and then invited students into the process. He empowered them to be their best, to voice their thoughts and ideas, all while guiding them and sharing his musical expertise. The end product speaks for itself.”

A Director with a Vision

When the time came to shoot the video, Troeger reached out to A/V Specialist Bryan DeVissiere. “I knew Bryan produced videos, including music videos, professionally. He’s also an accomplished musician himself. He understood the vision immediately and elevated it. I could not have asked for a better director and editor.”

DeVissiere, who holds an audio engineering degree, said the making of the video was an example of how St. Luke’s empowers the community: “I think St. Luke’s really cares about showcasing all of our talents, celebrating us as faculty and students. They allow us to be ourselves even if it means going on the rooftop to get a video done for the sake of producing something great for the State of the School.”

Collaboration and a Bit of Magic

“I had a dream team for every aspect of the State of the School including this video,” said Troeger. In addition to Valera and DeVissiere, Academic Technologist Eli Fendelman and senior Brian Douglas joined the production as camera operators, while Parker captured the entire experience in photos.

Valera enjoyed the collaboration between different departments and students and teachers saying “Because of the pandemic, it made us put our brains together to think outside of the box, which allowed for something great to happen. I’ve never seen any school do something like this, with this production value. It was a magical process.”

St. Luke’s is a secular (non-religious) private school in New Canaan, CT, for grades 5-12. St. Luke’s mission is an exceptional education that inspires a deep love of learning, a strong moral compass, the commitment to serve, and the confidence to lead. St. Luke’s Center for Leadership advances our mission by helping students develop exceptional leadership ability. Learn more.