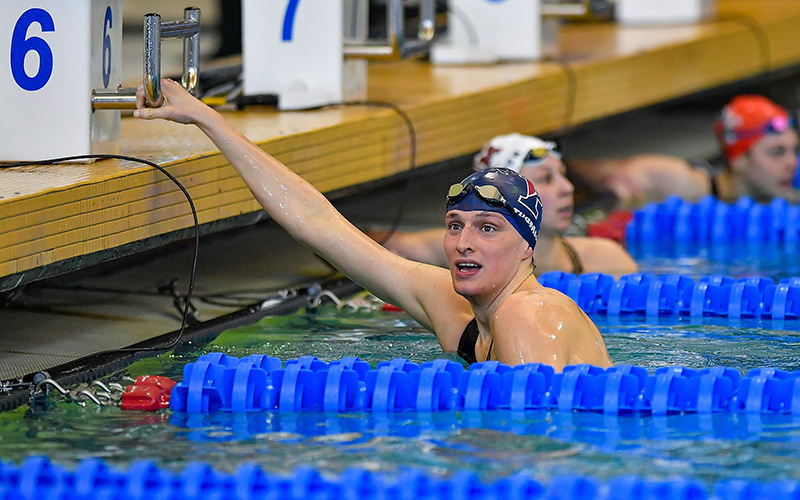 University of Pennsylvania swimmer Lia Thomas reacts after the 100 freestyle at the NCAA Swimming and Diving Championships on March 19. Thomas won the 500-yard free, becoming the first transgender athlete to win a Division I NCAA women’s championship. (Photo by Rich von Biberstein/Icon Sportswire via Getty Images)

WASHINGTON – A group of former swimmers and divers from the University of Arizona wrote to the NCAA last week urging it to “protect our women athletes,” after a transgender woman won a national swimming title.

It is the latest salvo in a national debate over transgender athletes that heated up when Lia Thomas, a fifth-year University of Pennsylvania senior who once competed with the men’s team, won the Division I women’s 500-yard freestyle championship earlier this month.

The letter, which named 40 former coaches and team members, said the NCAA policy that let Thomas swim “failed everyone” by subjecting her to “devastating national outcry and humiliation” while doing “irrevocable damage to a sport that has transformed our own identities for the better.”

The group behind the letter, which first appeared over the weekend in a swimming blog and on Twitter, said signers would not be available for comment this week. But in an emailed statement, the alumni group said the letter grew out of “an individual feeling of helplessness we were all grieving separately.”

“As we began to reach out to one another, we realized we all shared very similar feelings and had some great ideas to offer to the NCAA. We decided that if the NCAA wasn’t going to ask women swimmers our opinion then we would offer it to them ourselves very powerfully,” the email said.

Current Arizona swimming and diving head coach Augie Busch said Monday that the team would not have a comment on the letter and the UArizona Athletic Department did not respond to a request for comment.

But advocates for transgender athletes say statements like those in the letter are “not doing anything to protect women’s sports, instead, they’re just creating more division in sports.”

“What that tells us is that she was and continues to be a really talented, hard-working athlete,” Hoffman said. “This is not a case of someone who was failing in men’s sports and so then decided to compete in women’s sports.”

Thomas also competed in the 100- and 200-yard freestyle events at the NCAA Division I women’s swimming and diving championships from March 16-19, where she placed eighth and fifth, respectively.

Sharita Gruberg, a lawyer at the Center for American Progress, called that a “scare tactic” to deter teams from being more inclusive. The U.S. Department of Education last year expanded Title IX to include prohibiting discrimination based on gender identity and sexual orientation.

“That discriminatory approach is what is going to be more likely to have a Title IX violation attached to it, because that is overt discrimination,” Gruberg said of the possibility that schools might reject transgender athletes.

The controversy around Thomas’ participation comes as Arizona lawmakers have approved SB 1165, a bill that aims to bar transgender women from competing on women’s sports teams in Arizona schools. The bill has been sent to Gov. Doug Ducey for his signature, but his office did not immediately respond to a request for comment on its status. 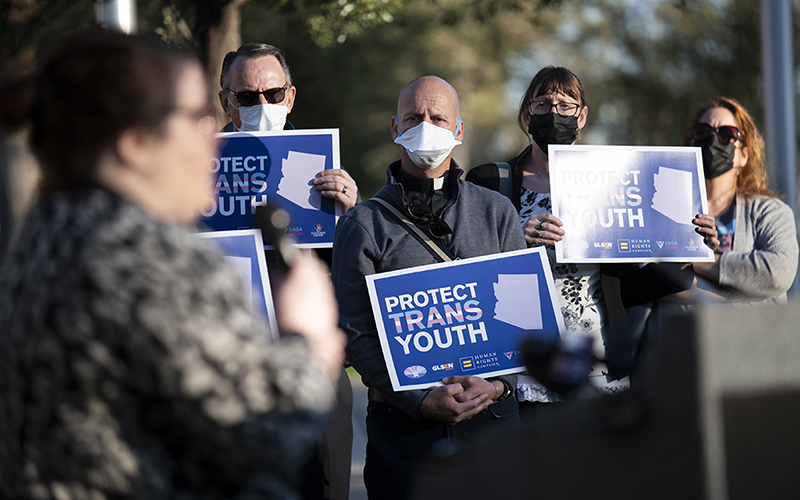 The bill emphasizes that men’s sports teams are not subject to such rules. That issue is raised in the alumni group’s letter, which noted the steeper obstacles faced by transgender men who want to compete.

Gruberg, the vice president of the LGBTQI+ Research and Communications Project at CAP, said the issue of transgender men competing in men’s sports “seems to confuse some folks.” By framing the argument as “protecting women in sports,” the group demonstrates its lack of knowledge on transgender issues, she said.

“We saw this with the bathroom bans too,” Gruberg said. “There was just not an understanding that if you ban people from the restroom that corresponds with their gender identity, you will be putting men in women’s bathrooms because trans men are men.”

The letter also suggested that the NCAA hold “trans swim meets … similar to the Paralympics or Special Olympic platforms” to be inclusive to transgender athletes while letting cisgender women compete in NCAA events.

Hoffman said such separation is unnecessary, citing international sports regulations that say transgender athletes do not have an inherent advantage over their competitors.

“In fact, it would cause a lot of harm to them as individuals, but also to sports as a whole, because we’re better when people can be their full selves,” Hoffman said. 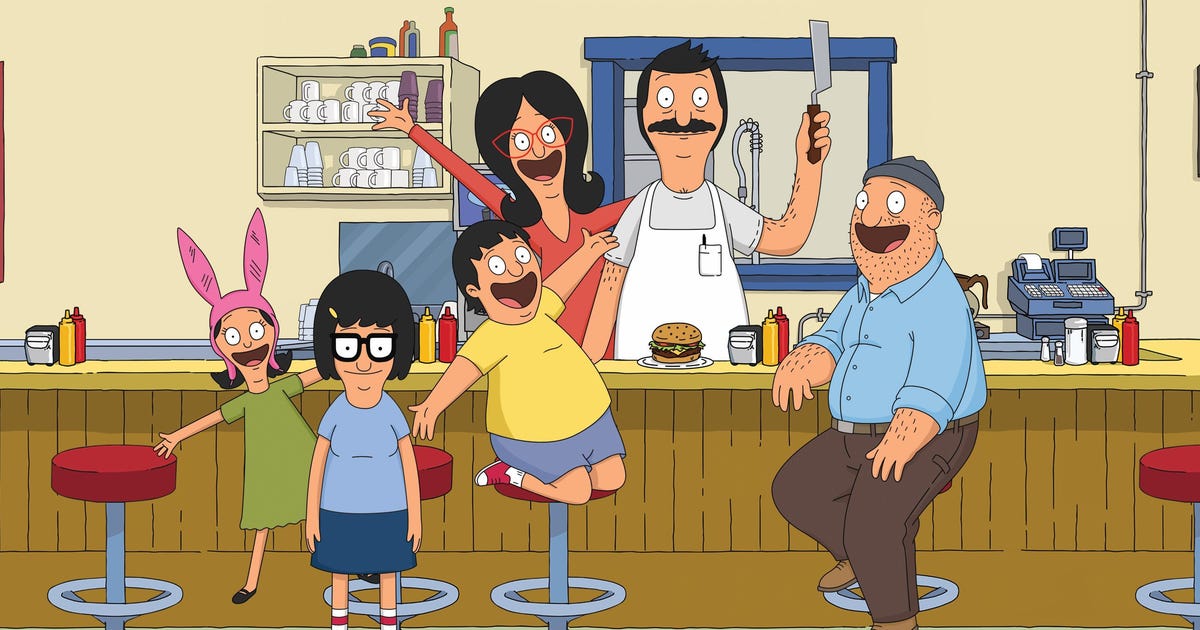 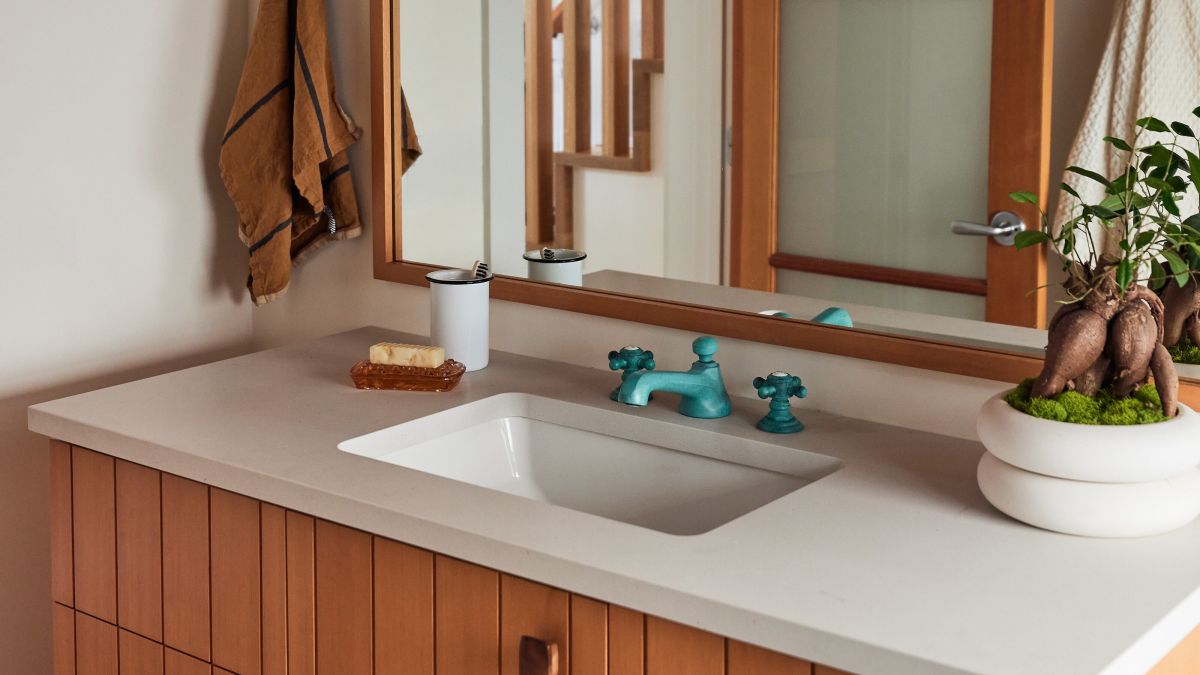